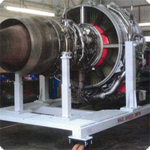 In February of 2010, A Green was asked to quote on the manufacture of a prototype engine stand for the use on sentry aircraft for the RAF.

The Purpose of this stand was for use during routine maintenance and repairs of the Awac aircraft engines.

A green in partnership with Rilmac Fabrication built this unit in an eight week period and at a cost considerably less than the other quotes obtained by the RAF. After construction both Rilmac and A Green were invited to the engine overhaul bay at RAF Waddington and an engine was trial fitted to our stand.

The engine fitted on the first attempt with only minor alterations to the position of the support legs in their slots.

This project has now forged a partnership with our local RAF base and is to A Green assisting the local base with ongoing engineering problems and solutions.